This site provides step-by-step instructions for faculty, students and staff on how to use various technologies at the College.

Older Android OS devices tend to prefer attaching themselves to a single Wireless Access Point, instead of jumping from Access Point to Access Point when walking around campus (on an infrastructure Wireless Network, this is called “Wireless Roaming”). When a user reports an issue with their Android device having weak signal when moving around campus, changing the following settings will help.

2. Tap on the WiFi Roaming settings in Configure WiFi

3. Configure the following on the device:

a. Set “Roaming Enable” to ON

* This can be set to shorter time frame for users who move around a lot, but will drain the battery. 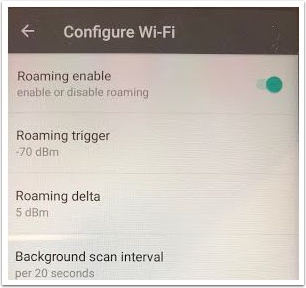 After setting this configuration, exit the WiFi Configuration tool and have the user proceed with their typical device usage. These settings should permit the Android device to move more freely between Access Points, and experience less latency with their network connections.